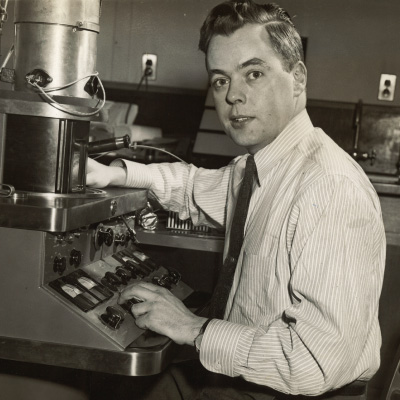 While it was a German physicist who developed the basic principles of the electron microscope, both Canada and the United States can legitimately claim to be first in making it practical. The model for today's electron microscopes was first built at the University of Toronto, but the instrument was fully developed at Radio Corporation of America (RCA) in New Jersey.

Following completion of his doctorate, Hillier took this design to RCA at Camden, New Jersey and developed it into the prototype for the RCA production model. It was the beginning of a long, successful career with RCA.

Hillier also discovered the principle of the stigmator for correcting astigmatism of electron microscope objective lenses, invented the electron microprobe microanalyser, and was the first to picture tobacco mosaic viruses and an ultra-thin section of a single bacterium. He holds 40 patents.

Hillier became an American citizen in 1945.