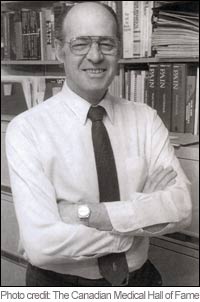 Developed the gate-control theory of pain

After studying for his PhD in 1954 with D. O. Hebb at McGill University in Montreal, Melzack began to work with patients who suffered from “phantom limb” pain—people who feel pain in an arm or leg that has been removed. He found that pain often has little survival value, and some pains are entirely out of proportion to the degree of tissue damage, sometimes continuing long after injured tissues have healed. While still a postdoctoral student, Melzack began collecting “pain words” and putting them into classes that belonged together, like “hot,” “burning,” “scalding,” and “searing.” In 1975, this pursuit led to the development of the McGill Pain Questionnaire, now used in pain clinics and cancer hospices around the world. In 1965 at MIT Melzack with his colleague Patrick Wall developed the gate-control theory of pain which states that pain is `gated’ or modulated by past experience. Gate-control theory led to the valuable discovery of endorphins and enkephalins, the body’s natural opiates. Melzack’s recent research at McGill indicates that there are two types of pain, transmitted by two separate sets of pain-signaling pathways in the central nervous system. Sudden, short-term pain, such as the pain of cutting a finger, is transmitted by a group of pathways that Melzack calls the “lateral” system, because they pass through the brain stem on one side of its central core. Prolonged pain, on the other hand, such as chronic back pain, is transmitted by the “medial” system, whose neurons pass through the central core of the brain stem. Melzack is the author of several textbooks on pain, and is co-editor of Handbook of Pain Assessment, 1992. He has also published books of Eskimo stories and won the Canada Council Molson Prize in 1985.