Discovered catalytic RNA, for which he won the Nobel Prize in 1989

"Don’t worry if things change. Just do what you do best."

The year is 1970 and it’s an unusually warm June day. Sid Altman is worried. He has no job prospects and he has little to show for a year of work in Francis Crick and Sydney Brenner’s laboratory in Cambridge, England. Crick was the co-discoverer of DNA (DeoxyriboNucleic Acid), the molecule that encodes the genetic information that tells cells how to function and grow. It’s an incredible honour for Altman to have been invited to this famous laboratory. At the moment, it’s probably the best place in the world for genetic research, but Altman has only two weeks left before he must leave. And he has no idea where he will go or what he will do next.

Altman is working on mutant cells with malfunctioning t-RNA (transfer RiboNucleic Acid)—a substance that is part of the machinery in a cell that decodes instructions in DNA. DNA and RNA are long twisty chain-like molecules. (For more information about these, see Chapter 16 on Michael Smith.) For about the thousandth time, Altman picks up a glass plate on which there is a thin layer of gel. But this plate is special. Altman is trying a new experiment, something no one has ever tried before. If he can just isolate a special type of RNA called precursor-RNA it would explain a lot about the process of reading the genetic code from a strand of DNA.

After putting a few drops of material prepared from the mutant cells onto the gel, Altman places the plate into a strong electric field. This technique, called electrophoresis is a standard method for separating chemical compounds. The electric field causes different compounds to move across the gel at different speeds. Altman waits several hours, and then lays photographic film on top of the gel. Tiny amounts of radioactive tracer atoms in the RNA emit X-rays that will leave characteristic bands on the film.

With a friend, Altman takes this latest piece of film into the darkroom to develop it. Within minutes the two young scientists both see the same thing. It’s just a white splotch on the negative but it gives Altman one overwhelming thought: “Now I know I can ultimately get a job.” He had taken the first step in a long series of experiments that would ultimately lead to the discovery of catalytic RNA.

Altman was hired for one more year in Crick’s lab, then became a biology professor at Yale University in USA. His work over the next two decades lead to the discovery of catalytic RNA and resulted in his winning the Nobel prize in 1989. He is still working on aspects of the same molecular biology system today.

As A Young Scientist...

Sidney Altman grew up in the Notre Dame de Grace suburb of Montreal. As a boy he loved books. He liked sports and writing, too, but the library was one of his favourite places. He read widely, from novels to books on sports and science. “I read everything I could get my hands on,” he remembers.

When he was 12 years old someone gave him a book called Explaining The Atom by Selig Hecht. The book showed Altman science's power to predict things. From then on he was a confirmed scientist. “I wasn’t interested in biology at the time. I liked nuclear physics,” he recalls today.

One Saturday afternoon, when Altman was still in high school, a friend asked, “Why don’t you come with me to McGill. I’m going to take the American SAT exams.” These Scholastic Aptitude Tests are a required part of any application to study at an American university. Altman had always thought he would stay in Canada and enrol at McGill for University in Montreal, but on a whim he wrote the SAT and he and his friend both applied to the Massachusetts Institute of Technology (MIT) near Boston. As it turned out, Altman got in but his friend did not.

Altman’s family had to scramble to get the money together to send him to this great school, and he wasn’t even sure he wanted to go. There was a big debate in the Altman household. But within three weeks at MIT Altman knew he wanted to stay; he was impressed by the high calibre of the students and he really enjoyed living away from home.

He received his bachelor of science (BSc) degree from MIT, then went to the University of Colorado Medical School in Boulder, where he obtained his doctorate (PhD) in Molecular Biology and met Leonard Lerman, a professor of molecular biology. Lerman was instrumental in helping Altman win a fellowship to work in Crick and Brenner’s lab in England where he began his Nobel prize-winning research. After those early discoveries, Altman came back to the USA and became a professor at Yale University. He never renounced his Canadian citizenship but now holds dual citizenship, both in Canada and in the United States.

Molecular biologists study the thousands of chemical reactions that go on inside cells to create and sustain life. Altman specializes in the chemical processes involved in copying information from DNA and using it to make proteins, the molecular building blocks of cells. Information is copied from DNA by the molecule RNA. About six different types of RNA are involved in this transcription process. 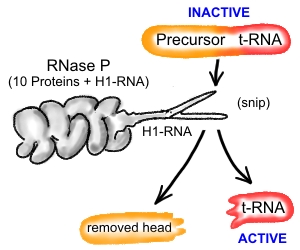 In Crick and Brenner’s lab, in about 1970, Altman was investigating part of this complex process. He discovered an enzyme called “RNase P” that chops a little “tail” off the end of an intermediate molecule of RNA called “precursor-tRNA.” Enzymes are special protein molecules that make chemical reactions go faster, a process called catalysis. Enzymes usually do this by holding or bending a molecule in a certain way so that one of its chemical bonds breaks easily. It took about 10 years, but Altman eventually discovered that the enzyme he was studying was not your average enzyme: instead of being a protein like all other enzymes, it was made of two parts — one strand of RNA and one protein. Furthermore, it was the RNA portion that provided the catalysis.

This was a significant discovery, because RNA molecules are much more primitive than protein molecules. Besides offering an explanation for how life might have begun billions of years ago before proteins existed, Altman’s discovery also hints at a way to beat a very troublesome primitive life form: the virus that causes the common cold. Cold viruses are made of RNA. It may be possible to design catalytic RNA-based vaccines that kill cold viruses by chopping up their RNA.

In recent years Dr. Altman and his research team at Yale University have applied their knowledge of RNA molecular biology to develop a method to inhibit the expression of any gene in any organism. They have patented a technique that stops the expression of virus genes in human tissue culture cells. Some day they expect it will work in vivo — in people.

The elucidation and understanding of the large role RNA plays in gene expression has expanded greatly since Altman’s discovery in the early 1980s. RNA employs a surprising variety of biochemical mechanisms that can result in different protein products coming from the same genetic code. “Tremendous amounts of different kinds of RNAs are now being identified,” says Altman. For instance, RNAi (or “interfering RNA”) regulates genes in microscopic worms called nematodes, as well as in plants and humans. It can turn genes on or off. These newly discovered powers of RNA are changing our concept of genes. We now know that, with the help of various types of RNA, a single gene can be interpreted in many different ways, leading to expression of various protein products. “It’s important, because 20 years ago we predicted this,” says Altman. It also helps explain how such a complex organism as a human being can arise from only about 30,000 genes.

A 3D model of M1 RNA, the catalytic RNA molecule that Altman discovered.

1. The t-RNA precursor molecule whose “tail” is chopped off by the catalytic RNA.

2. The arrow points to the site of cleavage where the t-RNA molecule is severed.

Altman feels that perhaps the biggest mystery to be solved by the next generation will be the understanding of the human brain.

A video interview of Altman on the Nobel Prize website.

So You Want to Be a Molecular Biologist

Career options in molecular biology are expanding rapidly as more and more is learned about the human genome and how it affects cellular processes and metabolic pathways. Molecular biologists are relatively well paid. Jobs are available in biotechnology, chemical, pharmaceutical, food, health care, resource, environmental and consulting companies, as well as with government, educational institutions, research institutes and in the forestry and agricultural sectors.

Dr. Altman’s advice: “Whatever you do, work hard, and take it seriously. Be prepared for unexpected turns. Do the required work and don’t goof off too much.” He points out that the goals of teenagers are rarely realized because they evolve as kids learn more. The more education you have, the greater the likelihood you will earn more money. To obtain a job in molecular biology you will need four years of university, followed by about five years of graduate school and a couple of years as a post-doctoral fellow. About ten or twelve years in all.

Altman finds his work interesting and the recognition he has received very satisfying. His main problem is getting enough financial support to do his research. “Everyone has to pay for the war,” he says, referring to the tendency of the United States government to spend heavily on its military, “so there is less money available for scientific research.”

His final bit of advice to aspiring molecular biologists: “Study chemistry, which I did not do.”

Learn how to get the DNA out of any living thing.